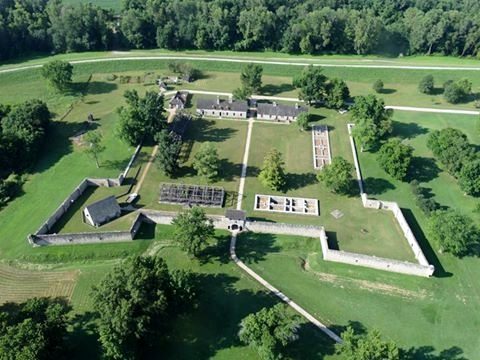 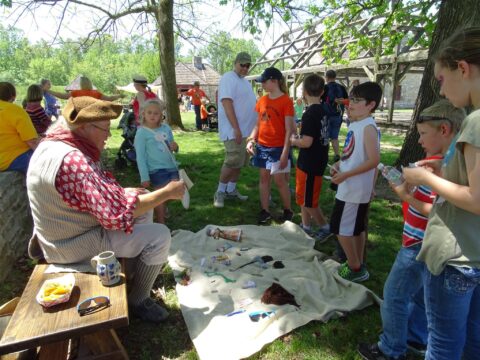 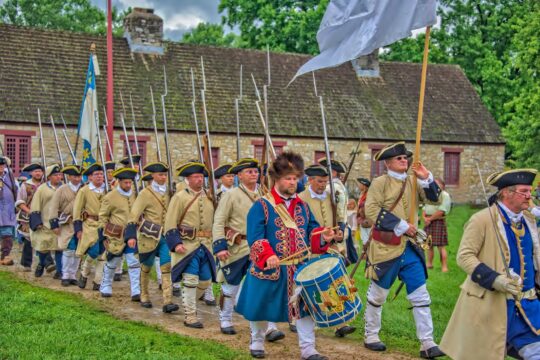 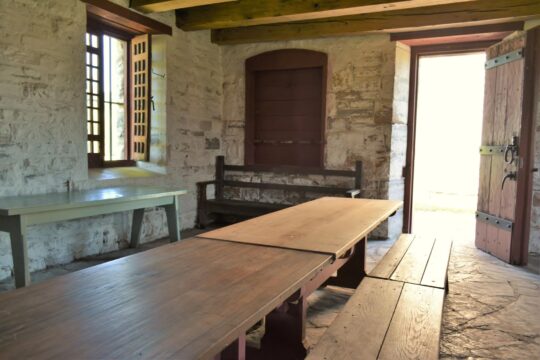 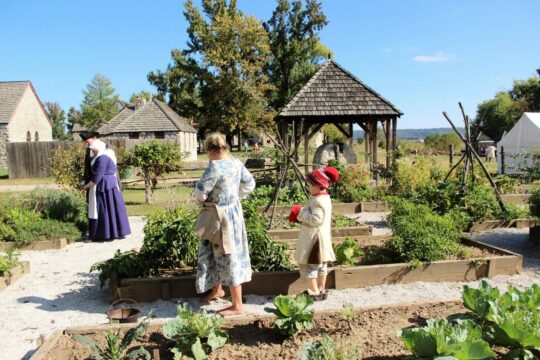 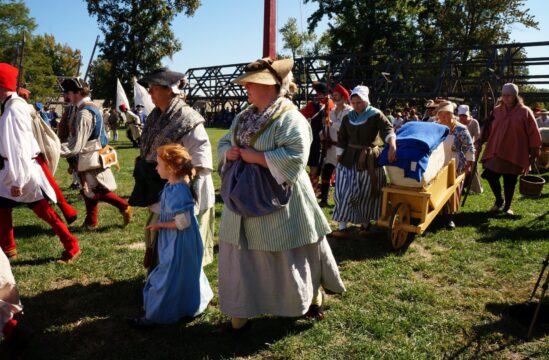 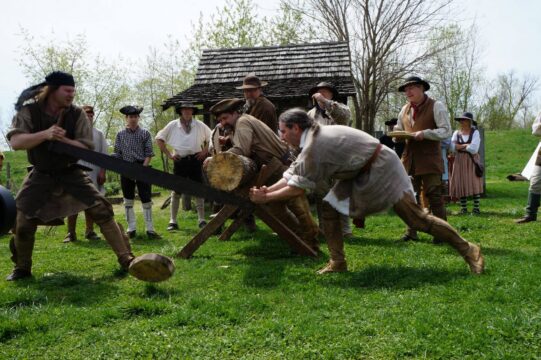 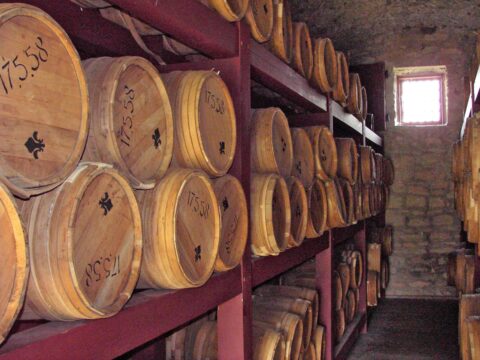 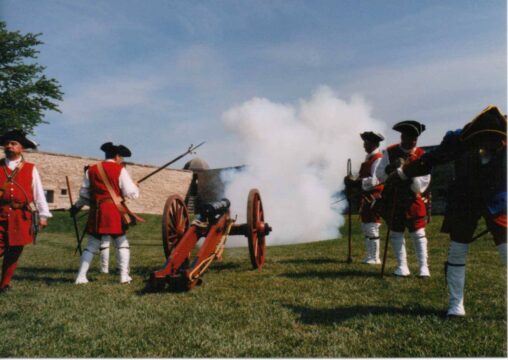 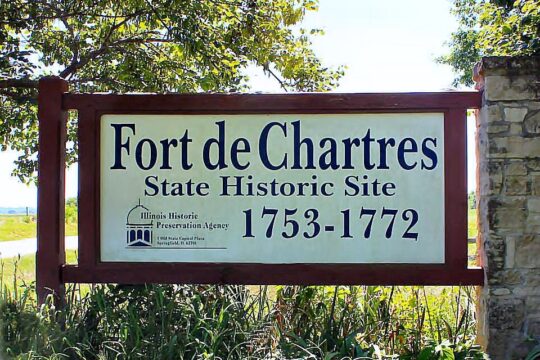 2020 heralds the 300th anniversary of the first of the four Fort de Chartres structures built and located in the strategic Mississippi River bottomland of Le Pays des Illinois. This first Fort, built of wooden palisades, signaled the creation a new center of French colonial government in Illinois. First occupied by the French in 1720, the Fort became the nucleus of French civil and military government, as well as an economic center in the Illinois country and the French Louisiana area during the eighteenth-century.

The 2020 Fort de Chartres Capital Project Repair Giving Campaign begins this January and a related 300th Anniversary special ceremony is to be held at the annual Fort de Chartres Rendezvous, celebrating its golden anniversary on June 6 & 7, 2020. The 300th Anniversary ceremony invitations will begin to go out later this month to dignitaries, campaign donors, and other supporters across the state and nation. Fort de Chartres State Historic Site’s 50th Annual Rendezvous, the largest gathering of its kind anywhere in the Midwest, attracts many thousands to the site during this two-day special event. The event will be expanded this year, in celebration of its golden anniversary.

A major public relations campaign for the event is being coordinated with Illinois South Tourism, the marketing arm for 22 counties across the state of Illinois. Join us as we celebrate the Fort de Chartres 300th anniversary milestone!

Thank you for your support in celebrating the 300th Anniversary of Fort de Chartres!

Located four miles west of Prairie du Rocher, Illinois, the site marks the location of the last of four successive French forts named “de Chartres.” Built in 1753 by the French during their eighteenth-century colonization of the Illinois Country, the massive stone fort was preceded by three wooden forts, with the first fort erected in 1720. Fort de Chartres served as the French seat of government and its chief military installation in Upper Louisiana from 1753 until 1765 when it was occupied by the British.  In 1763 France ceded much of its territory in North America, including what is now Illinois, to Great Britain. British troops occupied the fort from 1765 until 1772, when encroachment by the Mississippi River caused a collapse of the south wall. Subsequently, the remaining walls and buildings fell into ruin.

Today, the site features an imaginative reconstruction of portions of the fourth Fort de Chartres. The fort gate, built in the 1920s, has been remodeled several times. Portions of the fort’s walls were reconstructed on original foundations in 1989. The site was declared a National Historic Landmark in 1960 and was added to the National Register of Historic Places in 1976.

Inside the fort are the restored powder magazine, believed to be the oldest building in Illinois, two reconstructed stone buildings, and the exposed foundations of other buildings. The powder magazine is stocked with reproduction barrels and barrel racks. A combination museum and office building, built in 1928 on the foundation of an original fort building, houses exhibits depicting the history of Fort de Chartres and the Illinois Country. The large stone Guard House, reconstructed in 1936, contains a Catholic chapel furnished in the style of the 1750s, along with a priest’s room, a gunner’s room, an officer-of-the-day room, and a guard’s room. Also on the grounds are an operating bake oven, a garden shed built of upright logs in post-on-sill construction, and a kitchen garden with raised beds of produce that would have been grown in eighteenth-century Illinois.

Recreational facilities outside the reproduced fort include a day-use area with a picnic shelter and grills.

Fort de Chartres welcomes you to the heart of French Colonial Illinois! Please visit us throughout the year, whether for a wonderful day trip through the hills of southwestern Illinois or at one of our many special events held throughout the year.

The site is operated by the Illinois Department of Natural Resources. On July 1, 2017 The Illinois Historic Preservation Agency was divided into its constituents, the Abraham Lincoln Presidential Museum and Library and Illinois Historic Preservation, both part of the the Illinois Department of Natural Resources. The state’s historic resources contribute to education, culture, and the economy include ancient burial mounds, forts, and buildings erected by settlers, and homes connected to famous Illinoisans.

For additional Fort de Chartres State Historic Site and staff information, please visit the Contact Us page on this website.

Please note: Fort de Chartres State Historic Site is now re-open to the public after months of closure due to the closing of the Prairie du Rocher flood gates and area flooding. We welcome visitors return to the site and look forward to our Fall Special Events at Fort de Chartres! For more information about scheduled Special Events, please view the event information at the bottom of this page or visit the event page of this website or our Facebook Special Events listings.

We thank the Levee Commissioners, federal, state and local governments and agencies, and area residents and businesses for their hard work protecting this historic area.

Les Amis was an officially endorsed partner of the 2018 Illinois Bicentennial Commission.

Thank you to our Special Events Sponsors! 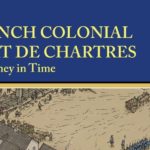 Show your support of this educational project by ordering your copy. Merci!

2019 Special Events Schedule is available on the Events page of this website! 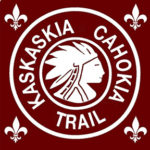 For other regional  information: 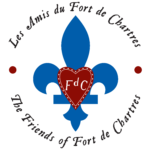 Thank you to Scott Irvin for supporting the Fort de Chartres website. The site is maintained by Les Amis du Fort de Chartres volunteers and for any website questions, please email lesamisdufortdechartres@gmail.com. All words in blue offer informational links.

Thank you to Mitch Lopata, of Lopata Design, for the donated graphic art creations for Fort de Chartres Special Events, including our new Les Amis logo.

In this season of thankfulness, Les Amis du Fort de Chartres is happy to report that during the recent Winter Rendezvous, an additional $1000 was raised for the Chapel Renovation Project with... Read More